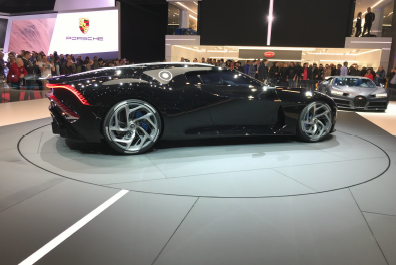 The 2019 International Motor Show held at Palexpo in Geneva was an interesting event for a few reasons. One reason is that big name brands such as Jaguar Land Rover and Volvo were not present. Its no secret that JLR after several years of growth are having a challenging time at present, but would that not be even more reason to remind the world what a fantastic range of cars they have in their portfolio?

There were plenty of Supercars and Hyper-cars to look at, some of which will maybe never be driven much but will end of in the private collection of the uber-rich. One such car was the absolutely stunning Bugatti La Voiture Noire. If you are an admirer of the supercar then this beautiful creation will cost you around 9.5 million pounds plus local taxes.

Something else that was very prominent was the hybrid or fully electric car. Volvo may have been one of the pioneers of this and certainly Elon Musk has probably done much to bring the electric car into the public conscientiousness, but now everyone is trying to get in on the act. Manufacturers are working hard to overcome ‘range anxiety’ which isn’t such a problem in the more eco friendly progressive areas such as Scandinavia, Scotland and Switzerland where they have been ahead of the game in installing electric charging points.

With many cars claiming to have upwards of 200 miles before needing recharging and fast charging becoming more and more available at motorway service stations this should soon become the remedy to any ‘range anxiety’.

The Audi E-Tron was an interesting car for a few reasons but particularly the ‘side mirrors’ camera option. I got to sit in it and with small rear facing cameras replacing conventional side mirrors and a small video screen built into the driver’s door this was getting very interesting, but might take a bit of getting used to where to focus your eyes on.

If you are a bit of a petrol head then the Geneva Car Show is always worth a visit, but better still if you can get your favourite dealership to arrange a visit to the preview days then you just put on the VIP wristband or lanyard and spend a whole day going round all the exhibits without all the crowds.